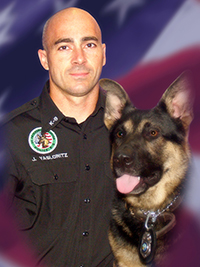 On January 24, 2011 at 6:58 a.m., a St. Petersburg Police Department’s undercover detective, Deputy U.S. Marshall Scott Ley, and a Pinellas County Sheriff’s Undercover Deputy went to a home to interview the wife of a wanted fugitive. The three investigators learned the fugitive was hiding in the attic and requested assistance.

The suspect then shot Deputy U.S. Marshall Ley twice, causing him to fall through the attic entrance.

At 7:29 a.m., officers on the scene radioed for help, reporting “gunshots” and “officer down.”

The department’s Tactical Apprehension and Control (TAC) team responded and entered the house during an exchange of gunfire with the suspect. They pulled Yaslowitz from the attic, placed him in an ambulance and transported him to Bayfront Medical Center where he was pronounced dead.

Yaslowitz was born on July 14, 1971 in Mount Kisco, New York. He moved to Pinellas County in 1985. He attended Countryside High School but later transferred to and graduated from Northside Christian School. He played wide receiver and defensive back for the football team during his senior year.

Yaslowitz attended Florida Southern College and then transferred to Palm Beach Atlantic University where he graduated with a BS degree in Psychology in 1993. Yaslowitz met his wife Lorraine at the university and they were married on August 7, 1993.

Yaslowitz joined the St. Petersburg Police Department on April 14, 1999. He served in several positions in patrol and became a member of the TAC Team. In December 2008, he joined the K-9 unit where he and his canine partner, Ace, were an outstanding team. Yaslowitz was very athletic and enjoyed playing on the department’s flag football team for ten years. He was a man of faith and passion who always lived life to the fullest measure.

K-9 Officer Yaslowitz was survived by his parents; his wife, Lorraine; his children, Caleb (12), Haylie (8), and Calen (5); and his sisters, Stephanie and Michelle. Yaslowitz was a very passionate person about his faith in God, about police work, and about living life to the fullest. Yaslowitz was very athletic and enjoyed sports and played on the Department’s flag football team for ten years. The service for Yaslowitz was held at the First Baptist Church in St. Petersburg and the burial was at the Sylvan Abbey Memorial Park in Clearwater, Florida.

At age 39 and with 12 years of service, K-9 Officer Jeffrey Adam Yaslowitz was the thirteenth St. Petersburg police officer to be killed in the line of duty.