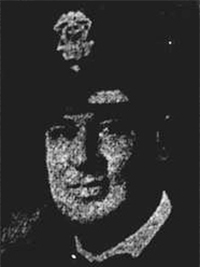 Officer Frank A. Pike of the St. Petersburg Police Department was directing traffic on May 7, 1933 near a church at First Avenue North and Fourth Street North, when a vehicle driven by Juvenile Judge S.D. Harris accidentally struck Pike. Harris advised that his foot slipped off of the brake and hit the accelerator. Pike was hospitalized at Mound Park Hospital from the injuries for about two weeks and died at 3:40 a.m. on May 19, 1933.

Officer Pike was survived by his wife, Patience; his daughter, Edna (24); and his brother, Elmer S. Pike. A large service was held at the J.W. Wilhelm funeral home chapel. After the service, Pike’s remains were placed into a vault for an eventual interment in Essex County, Massachusetts.

At age 50 and with 12 years of service, Officer Frank Arthur Pike was the fifth St. Petersburg police officer to be killed in the line of duty.