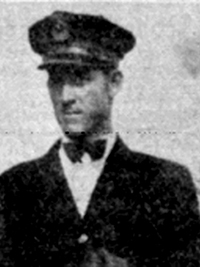 On October 16, 1937, Newberry was assigned with Officer James Alfred Thornton, who was working his first day as a sworn police officer for the City of St. Petersburg and was hired to work motorcycle patrol. Newberry checked on duty at 4:00 p.m. with his junior partner, and they were assigned to work at the Downie Brother’s Circus at Campbell Park. Early in their shift, a verbal altercation occurred between an intoxicated citizen, J.O. Moses, and both officers, and Moses was ordered to leave the circus. A few minutes after10:00 p.m., Moses returned to the circus with a gun. Moses shot Thornton from behind killing him instantly and then turned and shot Newberry, twice, in the right breast and kidney. Newberry could not use his right arm, but was able to draw his firearm with his left hand and fire three rounds at Moses, who was running away. When the crowd on scene attempted to help Newberry, he was quoted as saying, “get my buddy”. Newberry’s own brother and fellow City Patrolman, Robert “Earl” Newberry gave blood at Mound Park Hospital, as did others, but Newberry died at 4:04 a.m. on the following day.

The shooting suspect, Moses was tracked down to an apartment house in the 1200 block of 3 Avenue South. After further resistance from Moses, Officer J. Z. Stanley shot Moses twice. Many citizens of the City were also out looking for Moses, including Thornton’s own twin brother, John D. Thornton, who arrived on scene as Moses died.

Officer Newberry was survived by his step-mother, Ruby; his wife, Nina; his two children, William N. (4) and Norma G. (2); and his brother, Robert Earl Newberry. Robert Earl Newberry was also an officer for the City of St. Petersburg and continued his career in law enforcement becoming a lieutenant for the Pinellas County Sheriff’s Office. A large memorial service was attended by law enforcement officers, friends, and fellow citizens at the Ralph G. Cooksey’s Chapel and Newberry was buried in the Royal Palm Cemetery.

At age 30 and with 2 years of service, Officer William Glenn Newberry was the seventh St. Petersburg police officer to be killed in the line of duty.