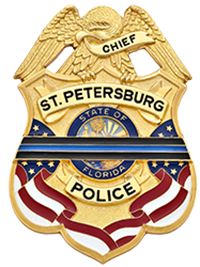 Chief of Police James A. Mitchell

Chief of Police James A. Mitchell was St. Petersburg’s first law enforcement officer and first and only chief of police to be killed in the line of duty. Born in 1857, Chief Mitchell became the first chief of police in a newly formed St. Petersburg, which was incorporated in 1903. The city’s population was 1,600 and a new charter provided for a chief of police rather than a town marshal. James Mitchell was appointed the first chief for a force that included four other officers. His duties included serving as a jailer for the new jail at 345 First Avenue S. (where it remained until 1952). His salary was $100 a month. Prior to this role, James Mitchell served as a rail conductor on the Atlantic Coast Line between Tampa and Jacksonville, Florida. Mitchell, who lived in St. Petersburg during his 10-year railroad career, retired and joined the St. Petersburg Police Department in 1903. He then became a Captain (Special Deputy) for Hillsborough County and later the very first chief of police.

On Christmas Day, Chief Mitchell arrested a local man for disorderly conduct behind a saloon on Central Avenue between Second and Third Street. While escorting his prisoner to jail, Mitchell was attacked with a butcher knife, from behind, by a second man named John Thomas. The butcher knife “pierced the heart” of Mitchell and he released his hold on his prisoner and turned around to defend himself. Although the chief fell mortally wounded, he was able to fire shots and fatally wound his assailant. Officer Bill Murphy who witnessed the attack also shot at Thomas, causing disfigurement to his nose. Thomas fell dead to the ground and the prisoner was taken into custody.

The news of the killing traveled like wildfire and within minutes there was an angry crowd of armed citizens, surrounding the jail. The citizens were carrying various weapons including axes. The mob demanded that Thomas be released to them for a lynching and the officers, who were clearly outnumbered, attempted to reason with the infuriated mob. Not knowing Thomas was dead in his cell, due to Mitchell’s gunshot fire as he dropped to the ground, they stormed the jail in an attempt to kill him. The four police officers were not able to cope with the dangerous crowd and soon the officers were overcome. The crowd brought ladders and several people climbed to the jail window with guns in hand and shot Thomas repeatedly.

Chief Mitchell was survived by his wife, Cornelia Mitchell, his daughter, Dora, and his three sons, James, Robert and Karl. The funeral took place at his home on Wednesday, December 27, and was largely attended. The Tampa Tribune reported that “sincere expressions of grief at this tragic death were everywhere heard” and his wife and children had been “the recipients of much sympathy.” He was buried in Greenwood Cemetery in an unmarked grave.