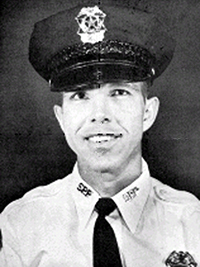 On April 15, 1964, Krupp was working in an undercover capacity looking for wanted subjects with active warrants. Officer Bob Megert was driving their unmarked vehicle westbound in the 2500 block of 15 Avenue South and they were working on a different radio channel than other officers in the area. Officer Jack P. Lersch was operating a marked accident van conducting a follow up investigation in Jordan Park. Lersch observed a subject, Freddie Lee McDougal, driving a vehicle and acting suspicious, so he attempted a traffic stop. McDougal refused to stop for Officer Lersch and a pursuit was initiated on MacDougal’s vehicle, which lasted about 15 minutes. During the pursuit, McDougal drove southbound from 8 Avenue South and reached a speed of about 80 miles per hour. McDougal drove through the stop sign at 15 Avenue South and struck the passenger side of Krupp’s unmarked vehicle. Krupp was thrown from the vehicle and killed instantly. Krupp and Megert were transported to Mound Park Hospital, where Krupp was dead upon arrival and Megert was treated for serious injuries. McDougal was also transported for injuries and was charged with manslaughter for the death of Krupp.

Officer Krupp was survived by his parents; his wife, Margery; his children, James Douglas (6), Brenda Jean (4), and Marvin David (2). The service was held at the Lake Maggiore Baptist Church and a long procession lead to the burial at Memorial Park Cemetery. The newspaper noted that Krupp’s plot was shaded by a sapling oak.

At age 31 and with 10 years of service, Officer James Allison Krupp was the tenth St. Petersburg police officer to be killed in the line of duty