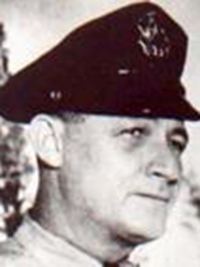 Goodson was working an “off-duty”, or extra duty, assignment at a bar at 7 Avenue South and 22 Street South on Christmas Eve in 1947 with Officer Coleman Powell. One of the patrons at the bar came inside and informed Powell that there was a subject outside the bar that was armed with a gun. Powell went outside the bar and approached the suspect, Willie Prentis, and started to ask him if he had a gun. Prentis spun around and started shooting a German ten shot handgun. The first round went under Officer Powell’s left arm, the second under his right arm, and the third went between his legs and left a hole in his pants. Powell grabbed hold of Prentis and took him to the ground attempting to disarm him, but Prentis was able to fire four more rounds before the gun jammed. Powell advised that he thought that the second round of the final four shots hit Goodson, as Goodson had come to assist him. Powell advised that he continued to struggle with Prentis and realized later that at one point they had been fighting on top of Goodson. Prentis broke free and started to flee on foot, so Powell shot at Prentis and hit him in the left shoulder. Prentis went to the ground, but jumped up and continued to run away. Powell continued after Prentis, rounded the corner of the building and emptied his firearm shooting at Prentis, but Prentis fled the scene. Powell discovered that Goodson had been shot when he returned to the shooting scene. Goodson was taken to Mercy Hospital on 22 Street South with a gunshot to the head and the doctors gave him no chance of recovery. Goodson died at 3:20 a.m. on Christmas day.

There was a massive effort to locate Prentis throughout Pinellas County. The Vice Mayor of Pinellas Park, John Holton, was driving across the Gandy Boulevard Bridge to deliver a load of feed to a store in Pinellas Park when he observed a subject he believed to be Prentis. Holton was not armed, so he continued to the feed store, obtained a shotgun, and had Kermit Hoffman ride back with him. Holton advised that they observed Prentis now walking back westbound along Gandy Boulevard. Holton advised that it was just starting to get dark and he asked Prentis where he was going. Prentis voluntarily accepted a “ride home” from Holton, but Holton took him right to the Pinellas Park police chief, Louis Wagonblast. Prentis told officers, “Mr. Julian was my friend and sometimes let me into the bar without any money”. Prentis advised further that he was drunk and did not know what he was doing.

Officer Goodson was survived by his father; his new wife of 13 days, Dorothy Maxine (Osborne); his son, Lane M. (14). Goodson had recently divorced and had just married Dorothy on December 12, 1947. The service was held for Goodson at Baynard’s Chapel and the longest funeral procession ever seen at the time led up to the burial at Memorial Park Cemetery. The newspaper described the attendants at the service by saying, “They were from every walk of life; Julian was a friend of millionaires and bums alike”.

At age 39 and with 7 years of service, Officer James Julian Goodson was the eighth St. Petersburg police officer to be killed in the line of duty.