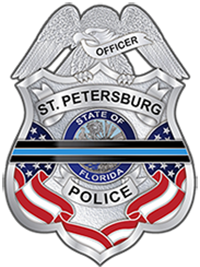 George worked as a police officer for the City of St Petersburg and was assigned as a Constable for the First District at the time of his death. On September 16, 1908, George was standing at a desk in the police station when a fellow officer arrived with a prisoner, who was arrested on a minor charge. The prisoner began fighting with officers and George was knocked to the ground, and the prisoner took an officer’s handgun. As George was getting up, the prisoner fired one round striking George in the head and a second round that missed Officer Horton Belcher. Officer Belcher initially shot the prisoner in the right shoulder, causing the prisoner to stop shooting and retreat into the jail. Officers ordered the prisoner to throw the handgun out of the cell, but when the prisoner refused, Officer Belcher bravely entered the jail, confronted the prisoner, and was forced to shoot the prisoner killing him in the cell. The prisoner's name was finally determined to be Abraham Nevi, and he was buried in the potter’s field of Greenwood Cemetery.

Officer George was survived by his mother, and three children, Ruby (13), Ralph (11), and Hubert (9). Officer George was described as being a “valued member of the City police force”. The Independent newspaper described George as being, “a good quiet inoffensive citizen and a brave police officer, one who never flinched at his duty”. Initially, George was also buried in the potter’s field of Greenwood Cemetery, but citizens of St. Petersburg became so upset that the Independent newspaper started collections for a private gravesite. Mayor Murphy pledged $25 from the City’s funds, towards the cost of a $45 private gravesite and casket. Fellow officers and citizens of St Petersburg donated the remainder of the funds and enough to purchase a suitable monument for the gravesite.

At age 40 and with 5 years of service, Officer Edward Adolphus George was the second St. Petersburg police officer to be killed in the line of duty.