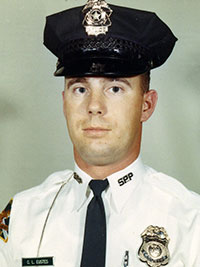 In 1965, Eustes started working as a police officer for the City of St. Petersburg. On September 24, 1967, Eustes was working in patrol and was dispatched to back-up another unit on a call of a domestic quarrel at 2149 ½ 7th Avenue South. Eustes arrived prior to the primary unit, which had both Officer Leslie J. Lee and Officer Thomas P. Harrell. Eustes could hear moaning coming from the female victim inside the residence and approached on foot. The suspect, James Edward Weaver, confronted Eustes outside the front of the residence and a physical struggle ensued. During the struggle, Weaver was able to get ahold of Eustes’ firearm, from the departments’ cross draw holster, shooting him once in the chest and three times in the back as Eustes crawled away to safety. Eustes was taken to Mound Park Hospital, but was pronounced dead upon arrival at approximately 8:30 p.m.. Weaver was arrested on scene, charged with first degree murder, and eventually given a life sentence.

Officer Eustes was survived by his parents; his wife, Jane; his children, Jewell Anne (4) and Charles Jr. (2). The service for Eustes was held at the Child’s Park Methodist Church and a large procession led to the burial at Memorial Park Cemetery in Pinellas County.

At age 26 and with 2 years of service, Officer Charles Lee Eustes was the eleventh St. Petersburg police officer to be killed in the line of duty.