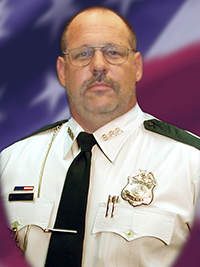 On Feb 21, 2011, at 10:25 p.m., a citizen called the St. Petersburg Police Department to report seeing a suspicious man that was holding a brick in his hand. The caller advised further that the subject walked through the rear yard of his residence in the 700 block of 3 Avenue South with a dark colored hooded jacket and jumped over a fence. The caller believed that the subject may have been trying to commit a burglary in the area. Moments later, the communications center dispatched Crawford with back-up Officer Ziglar to the suspicious call and other patrol officers began to move to that area. Ziglar arrived in the area at 10:34 p.m. and Crawford a few seconds later. As Crawford circulated the area in his cruiser, he saw a potential suspect, Nicholas Lindsey, Jr, wearing a dark hooded sweatshirt near the southwest corner of 2 Avenue South and 8 Street South. Crawford stopped his cruiser near that corner, exited, and approached Lindsey, who immediately produced a handgun and shot Crawford several times in the chest. Crawford drew his issued firearm and fired it several times, but Lindsey was able to flee the scene uninjured. At 10:37 p.m., Ziglar notified everyone over the radio that he heard an exchange of gunfire. Ziglar ran toward the scene, encountered an eye witness to the shooting, and found Crawford lying on the pavement near the driver’s door of his police cruiser. Crawford was transported to Bayfront Medical Center, where he was later pronounced dead. There was a massive manhunt for the unknown suspect, conducted by hundreds of law enforcement officers from several different agencies that lasted throughout the night and the following morning. The department released a security video of the suspect from a couple blocks away as well as a picture of Lindsey’s shoe that was found on scene. By the following afternoon, several tips generated the identity of Lindsey – a 16 year old. Lindsey was taken into custody.

Officer Crawford was survived by his daughter, Amanda (24). The service for Crawford was held at the First Baptist Church in St. Petersburg and Crawford was cremated. The leaders at CASA considered Crawford to be a very compassionate police officer. Crawford loved working “off-duty” at the Tampa Bay Rays professional baseball games. When he was at home, Crawford loved to work with his hands, fix things, and barbeque. Fellow officers describe Crawford as a humble, quiet, dependable, and trustworthy man, who dedicated his life in service to others. Every officer that worked or spoke with Crawford knew about his daughter Amanda, because he would speak of her frequently. Amanda Crawford said that, “He was the best Dad a girl could ever ask for and he was my rock, my strength, and my superman; I miss him every day”.

At age 46 and with 25 years of service, Officer David Scott Crawford was the fifteenth St. Petersburg police officer to be killed in the line of duty.