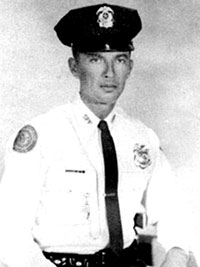 On Nov 10, 1961, Bessette was on patrol riding his motorcycle eastbound in the 1200 block of 22 Avenue South. A vehicle drove southbound on 12 Street South, ran the stop sign at 22 Avenue South, and struck Bessette’s motorcycle, which threw him 44 feet from the impact. Bessette was rushed to Mound Park Hospital and was in emergency surgery for three hours, but Bessette died from his injuries at 9:06 p.m.

Officer Bessette was survived by his parents; his wife, Brucie; and his three sons Blair L. (11), Michael G. (8), and Mark E. (1). A large service was held at the Sacred Heart Roman Catholic Church, and Bessette was buried in Hillsborough County at the Myrtle Hill Memorial Park Cemetery.

At age 37 and with 2 years of service, Officer Gene Arthur Bessette was the ninth St. Petersburg police officer to be killed in the line of duty.