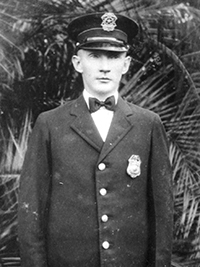 On May 23, 1929, Officer Barry and Officer Ed Patrick were assigned to a moonshine liquor investigation at night on Merrill Avenue (now Arlington Avenue North). Both officers were in a vehicle together conducting a stakeout to observe an expected delivery of contraband. A suspect, George James, committed a burglary at the home of Herman Merrill, an 80 year old attorney, at 917 Arlington Avenue North. James shot Herman Merrill during the offense and Merrill died hours later at the hospital. The officers heard the shot and moments later observed James running through an alley with a flashlight. The officers initiated a foot pursuit after James, which lead behind 1002 3 Avenue North. When the officers came around the corner of the residence, James fired a gun at them twice. The first shot narrowly missed the officers and the second shot hit Officer Barry in the chest and entered the heart. Officer Ed Patrick returned three rounds of fire at the suspect killing him on scene.

Officer Barry was survived by his parents; his wife, Gladys; his daughter, June E. (7); and his three sons, Wayne M. (6), Robert D. (3), and Roger L. (1). The funeral service was held at the J. W. Wilhelm Chapel with full military honors. Chaplain Edwards spoke of the friendliness of Barry as well as his bravery and courage to do his duty. Newspapers quoted Edwards as saying, “We feel it a great privilege to stand beside the body of our comrade and pay our respect and admiration to his memory, to his devotion to his duty; he was a man—a man to the last.” Barry was buried at the Lynhaven Cemetery in Orleans County, New York.

At age 29 and with 4 years of service, Officer Wayne Manley Barry was the third St Petersburg police officer killed in the line of duty.